This should not come as a shock to anyone (and certainly won't to anyone already following along), but A Simple Kind of Fear is not great literature. Even if it were an original work, it would never receive any awards or great critical acclaim. It's cotton candy. Fluff. It's a sappy love story between two fictional characters I am quite fond of, wrapped up in the most over-the-top storytelling antics I could contrive. Seriously. There's even a musical episode. There is no deeper, hidden meaning anywhere and this is not a vehicle for any sort of social commentary, or anything else for that matter. It's just a story.

A Simple Kind of Fear has many original characters. One of these is Karl. He's the Wheeler gamekeeper, who was hired on to replace Mr. Maypenny upon that good man's passing. At the time of Mr. Maypenny's death, Dan was a senior in high school. He moved into Regan's apartment, and still uses that bedroom whenever he comes home. Shortly before Mr. Maypenny passed away, he finally sold his land to Mr. Wheeler, using the proceeds to set up a college fund for Dan. Karl lives in the old cabin.

The original theme of ASKOF was "Casper's Lullaby." As a midi file, it worked well, but the full orchestration doesn't suit the story as much, and so a new theme was chosen.

In the, "Wait. How old are they?" category:
1. I have Dan the same as Mart's age - one year older than the girls.
2. Regan was 22 in the beginning of the series. And while that got tangled up later in the books, I have stuck with that. He was still 22 after Trixie turned 14, so he is 8 1/2 years older than she is.

ASKOF remind you of Twin Peaks? Yeah. That was definitely deliberate. All the way down to using "Ghostwood" as a name. Now, if only I could work in the log lady somehow.... Also, the first 6 episodes were inspired by the really weird music of Lee Blaske, which you are hearing now.

And, yes. That is Marc Blucas in the opening and closing credits. I chose him for Regan umpteen years ago (long before most people knew who he was) based on the first photo here - which made me think, "Hmmm. He could easily be a redhead." In trying to find that photo again, I came across these other two, which - Hee. What can I say about either?
Trixie is now Maddie Hasson. The original photo I had for Trixie (when season 2 first aired) is long gone and I actually never knew who the actress was anyway. I picked Maddie this time around because of this photo from The Finder, which makes me laugh every time I see it. She also starred in a short-lived show called Twisted that could have easily fit right in with the ASKOF world. 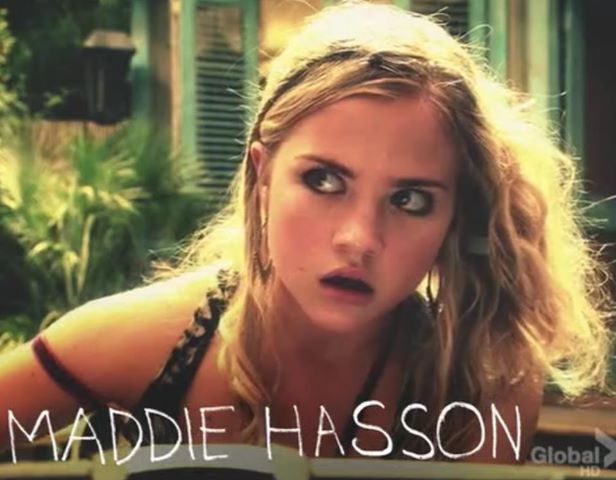 Yes. Technically speaking, the credits should have the actors' names, not the characters, but just go with it. :)