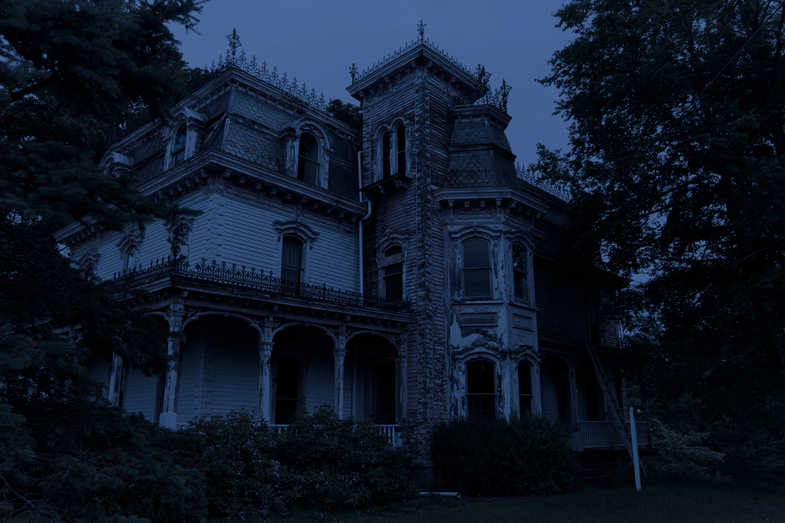 You follow the trail for almost five minutes. Ahead, you can just make out patches of sky where the trees seem to be thinning. You slow as you find yourself no longer on a path, but rather standing on an overgrown lawn leading to an old mansion that, if you were a Hollywood producer, would be your first choice for any horror flick you planned to film. From it's crumbling Victorian façade to its broken and missing shingles to its dark, forbidding windows, everything about the house just screams, "Watch out for deadly specters and fiendish ghouls!"

This must be Ten Acres. Growing up in Sleepyside, of course you'd heard all the stories about the estate and knew it had not so long ago passed into the hands of Jim Frayne as part of an inheritance. You wonder what he plans to do with it and whether or not it's even worth saving, if he had any thought of restoring it to its former glory.

You realize you should turn back around and retrace your steps to the old tree and choose the other trail. Ten Acres is not part of the Wheeler preserve and besides, you don't really have permission to go any further on Jim Frayne's property.
Just because family legend says your grandfather hid the money somewhere in the preserve, it doesn't mean for certain that he never went into the old mansion. You want to at least take a quick look around.

You can't remember for certain, but you think maybe at the time of the bank robbery, Ten Acres was still inhabited and probably your grandfather avoided it entirely.  You'd better head back.